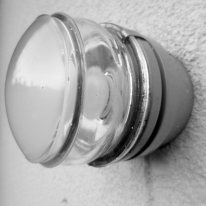 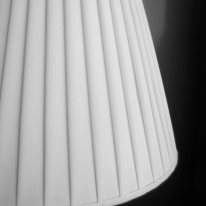 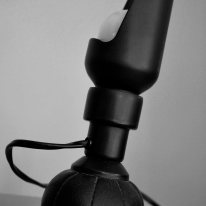 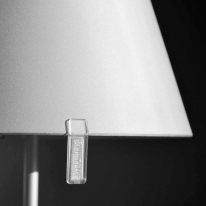 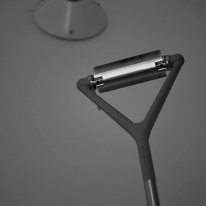 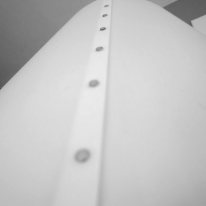 I am pretty sure most of us like to collect something. Perhaps its vinyl, volcanic rocks or paint colour charts? Well, I have to admit that I am a serial lighting collector. It’s not a fad, no, no, it’s taken thirty years to get this far and although it may seem rather extravagant I would sooner shuffle around in a pair ancient clogs (actually I do) if it means I have more to spend on lighting.

In my mind a classic is only a classic if it stays with me occupying my thoughts year on year. It should have a presence and charisma that adds energy to a space. It should also be practical and perform an excellent job. It should have a story behind it and it will often be inspired from something ordinary that has given the designer that initial spark. It should be well made, crafted and every detail tweaked.

Take Achille Castiglioni  who along with his brother Pier designed the iconic Arco floor light in 1962 after being inspired by the every day street lamp. Arco is a practical solution to allow overhead light in a room without the hassle of wiring a ceiling. But it isn’t just practical. The heavy Carrera marble base stabilises the long slender arm that sweeps up and out into the room. And the circular holes in the stainless steel shade allows the heat from the bulb to dissipate but also sends beautiful soft smudgy circular shadows up onto the ceiling. A well thought out solution to an every day need. Perfect.

All the lights I have bought over the years still give me immense pleasure. What’s more they still do their job and I haven’t ‘gone off’ any of them. And when a part does eventually perish, they can be repaired – not thrown out! I have two Fresnel lights designed by Joe Colombo in 1966 lighting up my front door. Lately a rubber seal preventing rain water from getting inside the fitting perished. I contacted the manufacturer, Oluce, they e mail me a diagram of parts, I identify the little piece I needed and it arrives shortly afterward through the post and my light is set for another decade of Scottish weather. That’s how it should be. My lights may have been fairly expensive but they don’t need replacing so actually it’s not such a bad habit after all…

What do you collect?

If you are interested in twentieth century furniture, you may well share the rather annoying habit I have of “furniture spotting” while watching films. Feeling the need to mention product names, who designed them, the year of manufacture is I am sure rather tedious for anyone wanting to concentrate on the film’s plot and I am trying to curb the habit but I thought you may like to do a little furniture spotting in  bica do sapato restaurant in Lisbon, described in the Lonely Planet as a “uberhip dockside restaurant part owned by John Malkovich.

The terrace chair, Joe Colombo ‘s iconic Sedia 4867 designed in 1968. The first industrially produced plastic chair made from a single mold. Practical and comfortable but also semi- formal in black next to the crisp white linen.

A twentieth century enthiast couldn’t complete the interior without some Mies Van der Rohe in the project (above). The Barcelona stools (1929) give the area a certain lived-in cache. 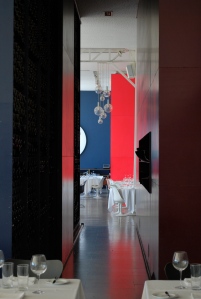 Look carefully above and you will spot Eero Saarinen ‘s tulip chairs (1955) creating a smooth, sleek modernism to the dining room (chairs which of course appeared in the 1955 Star Trek TV series). And as this is primarily a blog about colour, you will notice the designer has chosen the traditional Japanese four colour palette which dates back to the eighth century. Bright vermillion red, pure white, jet black and sky blue used together represent the “perfect” palette in Japanese culture. A good choice as the restaurant is famed for its sushi.

Well I’m afraid I had to concede defeat with the last piece of furniture I spotted. The lounger (below) was commissioned specially for the restaurant – a brilliant combination of an old army bed and clear plastic upholstery stuffed with hay, genius.

4 skies, 1 day. Slightly distracted.
This Elaine Sturtevant’s ‘Peinture à Haute Tension’ 1968 appropriation of Martial Raysse ‘High Voltage’ 1965 made me smile in the Stedelijk Museum, Amsterdam last summer.
Being lured by the hills, boots going on.
Two new designs from the exclusive @craftdesignhouse Leonardo da Vinci collection
Delighted to be able to share images from an exclusive commission for @craftdesignhouse Leonardo da Vinci museum collection. Inspired by Leonardo’s sfumato technique to soften the transition between two colours. This tie is based on the colours of the robes worn by Jesus in The Last Supper painting. The blue blade symbolising sky & heaven to red at the tail which bleeds into the blue meeting half way to create lilac, a colour associated with peace, purification and loyalty. If you would like to purchase one of these ties, please contact myself or @craftdesignhouse for details.
Blue bricks, winter light. I was talking about the amazing bricks of Chicago yesterday with @_rachelrachel_ and then I saw these blue bricks in Edinburgh this morning.
Looking at red today
Street scene making me want to paint
2019 highlights...Spring saw the Horizon Collection in the stunning stores of @british_made in Tokyo. In March the Horizon Collaboration with @nataliejwooddesigns opened at the wonderful @ryanjamesstudio with @ardbeg kindly supporting the launch evening. This month, December, saw new work travel to Shenzhen, China with @craftdesignhouse Throughout the year @theheraldfashion @heraldluxurymag @carmen.haigh have given wonderful editorial coverage, thank you! And our favourite gentleman of style @franz_1955 always looking amazing, this time in the Sandy Eclipse tie. Thank you so much for all your encouragement throughout the year x
Merry Christmas and a heart felt thank you for your interactions and encouragement over the year. Hope you all have a wonderful day!
Delighted to be popping up this weekend at a fresh new event along with around 20 other Edinburgh based artists & designers. Art, jewellery, ceramics & textiles will be displayed around the beautiful four storey Georgian town house @claremontcrescent Join us for a glass of something, tunes by @edinburghdjhire @alex_tronic Swipe left or details!
Colour collecting in the Granite City