After having a conversation with a customer today it dawned on me that there is often a reason behind a design – unless of course you are like one of my all time favourite artists Agnes Martin who claims her head was like an empty vessel which captured external artistic messages which she then applied to canvas – she doesn’t seem to take much credit for her beautiful paintings as she claimed she was just a receiver and her hand automatically carried out the work. Wow.

You may well find yourself connecting with a piece of art or design but be totally unaware of the inspiration behind it. That’s great but I find if I am able to speak to the artist and hear their story, the art takes on a new depth or an extra layer.

I was lucky enough to meet artist Sandra Robinson at the Waterside Arts Centre, in Sale, close to Manchester last month and I made an instant connection with her ‘21:00 From London Euston’ train window series. I found them immensely atmospheric as each painting depicted dramatic and ever changing natural lighting conditions on a journey. She explained she was on a train from London to Manchester and she made written notes of what she saw from the window. She took these notes back to her studio and painted from her written instructions and the result is a very intense series of beautiful paintings full of movement.

A series of ten paintings by Sandra Robinson

The designs I have on my mugs also have a story attached. I was working in Iceland last January and as you can imagine there was very little light and it was brutally cold. I was watching the birds at the central lake, ‘Tjornin’, in central Reykjavik when I spotted some tiny low lying flowers growing on the banks of the lake. They made me smile that despite the very harsh conditions they were still determined and gutsy enough to grow! I knew straight away that I wanted to use these brave flowers in a design. The finished design is screen printed onto bone china mugs because I liked the idea of a hot steaming drink (obviously there are lots of steaming hot geothermal pools in Iceland) being enclosed by these tough little Icelandic flowers. The sky changes very quickly in Iceland and within a few hours I witnessed a stunning pink sunrise, intense clear blue skies, grey, snow laden skies and was hoping for a green Northern Lights sky – hence the colours of the mugs…

I also found the town and the Icelandic people very colourful so the two tone set of mugs represent the brightly coloured houses of Reykjavik, the black one the dark winter sky – nobody would know this but I thought you may like the reasoning behind the design! 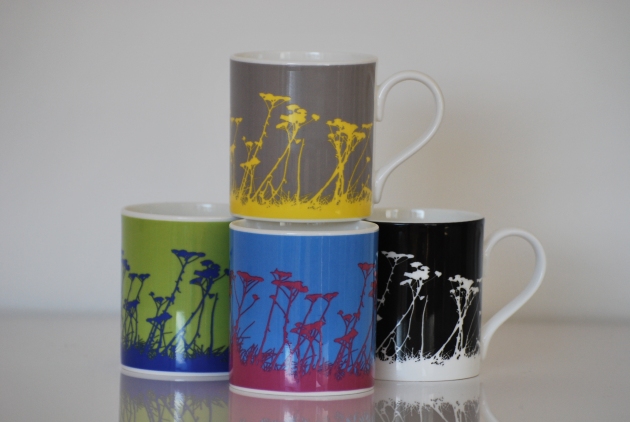 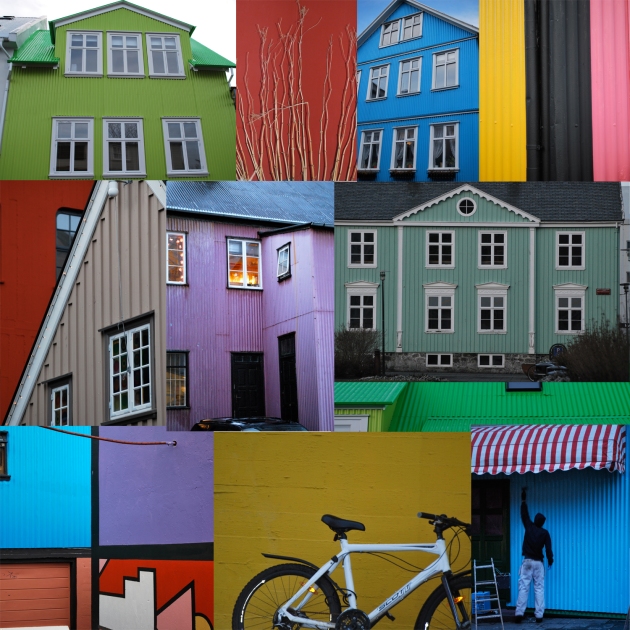 The powerful, strong and elegant birds I was watching are depicted on these mugs.

My ‘urban’ series of linen tea towels were inspired by the huge brightly coloured cranes and loading machinery at Leith Docks, Edinburgh. It’s a gritty, industrial and efficient place where tonnes of cargo start and finish their massive journeys across the sea. A magical place actually, full of intrigue. I really wanted to convey the bold, brash, powerful bright shapes and screen print the designs onto linen.

And lastly, my Botanical DNA scarf was inspired by my Dad who was both a geneticist and a gardener. When I placed the plants in long rows, they reminded me of DNA helixes! The design is printed on a semi- sheer, floaty silk cotton blend. 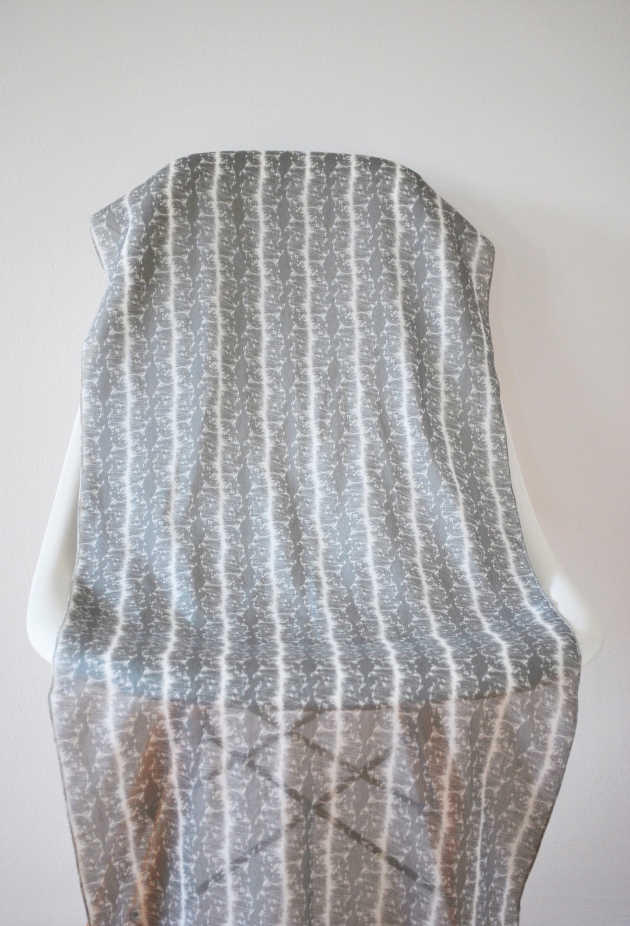 Well I think that’s probably enough about my own designs for now (!) but you can see more (like my Sol LeWitt inspired cushions) on my shop

What are the stories behind your creations?

Have you ever been obsessed with a plant?

I am intrigued with how a plant can become so profoundly influential and evocative. Early memories of brushing past great fronds of wild fennel on the white sand dunes of Northern Brittany have well and truly got into my system.

A few years ago I tried to turn a small corner of Scotland (my garden) into a taste of Brittany by planting fennel and artichoke seeds.  I can now report that both plants thrive in conditions here in Edinburgh and this summer I returned from holiday to find a fennel jungle staring back at me. At this point I was reading a novel by Vanessa Diffenbaugh, The Language of Flowers , and I was not surprised to discover the Victorians associated fennel with strength and vigour – highly appropriate as my supremely healthy fennel plants had colonised every little crevice they could find, including cracks in the tarmac drive!

Of course I did the many obvious things with the crop, like eating the bulb, the fronds and the seeds (fresh and dried) and I had huge vases of the decorative stalks in the house which dropped hundreds of beautiful tiny balls of pollen which I gathered to use in a colour study (still thinking of Wolfgang Laib exhibition I saw a few years ago in Washington D.C. ) When I mentioned the pollen to a chef friend from Timberyard he told me the pollen is a great ingredient to add to bread to give it a honeyed aniseed flavour, a good texture and lovely colour. This was news to me but I have since spotted the pollen, often called, The Spice of Angels,  for sale on various specialist spice sites and I have thoroughly enjoyed experimenting with it in my own kitchen. If you are after more ideas, pump in ‘fennel’ to Kellie’s  Food To Glow blog and you will learn about the anti cancer flavonoids present in fennel and find a multitude of great recipes too.

But now for the other influence the plant has had on me – some new work.

This is my most recent design called Fennel Tangle. I had it printed onto 100% Habotai silk by Solli and Zoe at their brilliant Edinburgh print bureau. Although it’s normally homewares that I am involved in, I decided this print had to be worn. Over at Make Me a Frock, you will find Claire, an incredibly talented seamstress (and also a real perfectionist and poet) who has razor sharp observational skills and I knew she would interpret the fabric into a beautiful garment…and by golly she has. Below are images of the blouse she created for me. I am blown away by the design and microscopic stitches on the extremely fine silk. The blouse has that rare power that very occasionally clothes can give – it’s my new ‘cloak’ of strength and vigour, thank you Claire. 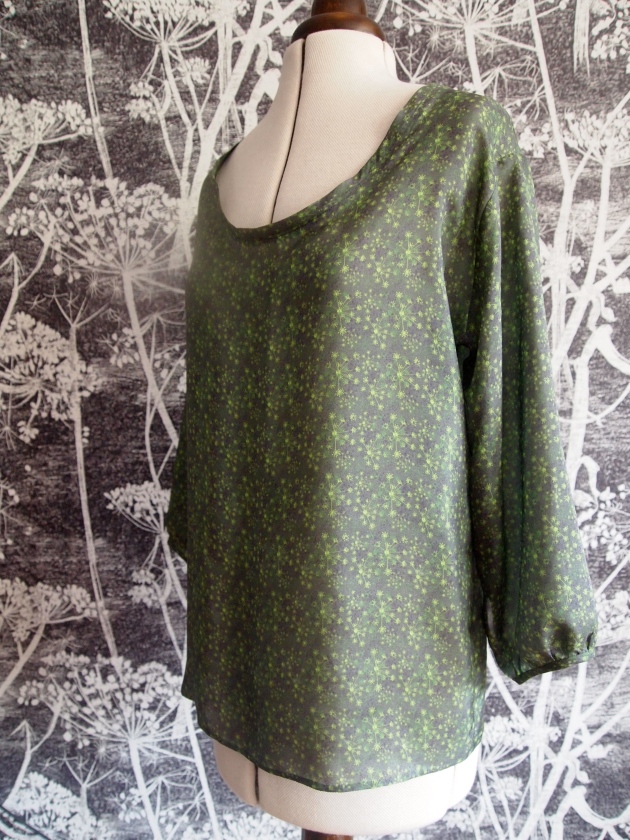 I’ve also added several cotton canvas bags to my shop, one of the designs, surprise surprise features a fennel head.

What is your favourite plant? Do you have early memories of a particular plant? Have any plants played a role in your work?

You know the feeling when you sit down to work  with task list in front of you and for some reason or other you just can’t find your groove? It happens to us all once in a while, doesn’t it?

I have to admit when it happens to me, there is little point in even trying. I firmly believe it’s our bodies craving fresh air, natural foliage (looking at green definitely works), basically anything other than looking at a computer screen. Luckily I am self employed and can take action when that stale feeling creeps in.

You only need to look at a pristine, vibrant green leaf to feel energised and engaged with the world. And for that reason, one of the first places I seek out whether at home or while travelling, is the local botanical garden.

We are exceptionally lucky here in Edinburgh as I’ve mentioned before in Strength and Form to have The Royal Botanic Gardens Edinburgh. But there are others for you to seek out and visit, hundreds of them in fact, sometimes in the most obscure places. But beware, many of our fabulous gardens are struggling for funding which is terrifying considering they offer so much to such a broad range of recreational and educational purposes.
I was in St.Andrews last week (an easy one hours drive or train journey from Edinburgh), and was fortunate to be taken to St.Andrews Botanic Gardens – an absolute haven of native and exotic plants. I wasn’t really looking at the plants from a botanical angle but simply looking at their colour and form. Endless fun and a focused mind. Result.
Do you have a local botanic garden that you can tell us about?

How do you find your focus on fuzzy days?

When I have a lot to think about I like to surround myself in greenery and here in Edinburgh we are immensely lucky to have the Royal Botanic Gardens on our doorstep. Today was one of those days so I spent some time in the glass houses looking at the magnificent plants. I can’t recommend this “therapy” more strongly – just look at the strength and form of these plants, they are inspiring in so many ways.